Listen to the full podcast here.

The Nodle Cash App pays users for the nearby IoT device data that they move to the cloud, like a circular economy profit-sharing system.

"With the Nodle Cash app, we directly pay the users for the data that they are sharing, like a profit-sharing system. The other way we distribute the Nodle tools is that we work with app developers to integrate the Nodle tooling inside the application so that they can pay their users."

"Another way to fund the web, instead of being funded by apps, you can simply fund it by collecting the data that is specifically around you and the model behind Nodle is that ultimately all the data that is around you and your phone on devices that are willingly broadcasting it in a public way, may ultimately be more valuable and more usable than making profiles on people"

"We actually started modestly on Stellar and we pushed the app on the HTC Exodus phone, and people starting using it, because it was there on your phone, and why not? It was free to use and maybe one day the Nodle cash was going to be worth something, and they have nothing to lose."

Blockwatch is looking for an exceptional Infrastructure Engineer to join our highly-skilled and passionate team. 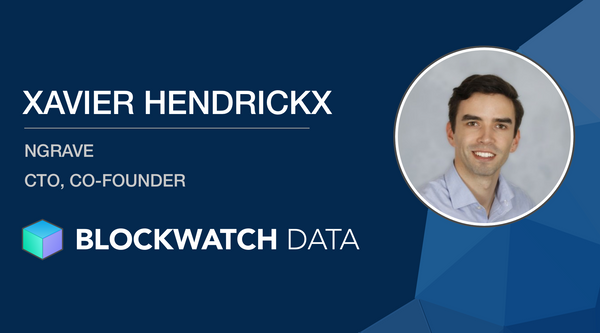 NGRAVE'S mission is to eradicate the loss and the malicious hacking of your crypto.