At 80.27%, Tezos' network-wide staking ratio remains close to its all-time high of 80.4% at the end of May 2020. At the same time, this implies that staking rewards are at an all-time low of 5.93% with a yield above inflation sitting at only 0.94%. The meteoric rise of custodial staking that started in October 2019 has come to a halt. In fact, tez staked across the top 6 custodians has fallen -0.7% to 151.6M tez since our last report. Together, all custodians now control 18% of the Tezos network's consensus. Network-wide stake grew by +0.8% (+5.6M tez). This suggests that new delegators are choosing community bakers despite the convenience offered by custodians.

Tezos allows delegators to move their coins freely or switch their bakers of choice whenever they wish. A lockup period only exists for security deposits of bakers. People can re-delegate, sell, or arbitrage at any point in time. To visualize this situation and identify long-term loyalty shifts, we look at churn rate and specifically how many delegators over time empty their accounts, migrate to custodians, or sell their stake. Delegator Churn on Tezos is remarkably low (3-11%) and there is a positive correlation with shifts in price. With rising prices, churn goes up as well (as some people sell their stake). With falling prices, churn goes down as well, which suggests that there are only a few active traders in Tezos' community. Most people are clearly in it for the longer term.

The amount of Tezos delegators continues to grow, having reached the highest growth ever in May (+7.5k). June will likely see the same pace. In its 2 years of existence, Tezos has gone through two epochs of growth already and is now in the middle of its third epoch. We call them 1. The Early Backers (Jun'18 - Mar'19), 2. The 2019 Boomers (Apr'19 - Oct'19), and 3. The Brrrr Generation (Nov'19 - now). Each of these epochs has kicked off with an uptick in delegator growth, followed by a significant price surge accompanied by delegator churn increase (graph above), and an eventual decline in price and churn. Finally, the epoch's ends are marked by a new low in delegator churn rate, and a 2-3x delegator amount gain. The current third epoch is still ongoing. Churn is declining, delegator growth is still increasing, while simultaneously the custodial uptrend seems broken.

Tezos' development activity is strong and steady. Various teams are busy working on infrastructure projects such as price and value oracles, document management, asset tokens and standards, as well as exchange platforms. Most projects have not yet hit Mainnet but this is positive since the Tezos smart contract developer community tends to put a high emphasis on both security and correctness just like the core dev teams. Ramped up efforts by the core teams for the next protocol version 007 foretell a feature-rich release to be expected. An early testnet is likely to be seen before voting on Mainnet starts in late summer. 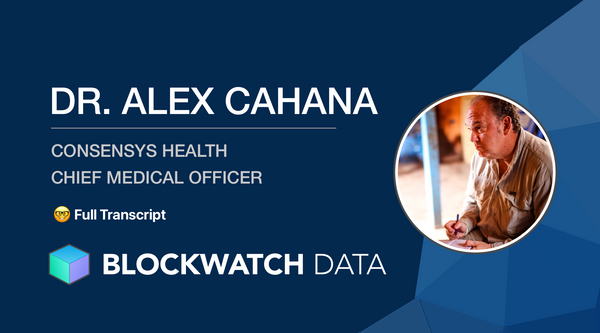 He is the Chief Medical Officer and EMEA lead for Consensys Health where he is working on solving the world's health crises with better data sharing with federated learning. He is a blockchain expert in Healthcare for the UN to promote cooperation between private enterprises and governments.

A look behind the scenes of the Tezos network, April to Mid-May 2020. Quality data-driven insights by Blockwatch Data.